Chip capacitors (MLCC) of the main control board are all Murata capacitors; well-known brand capacitors, with guaranteed quality and a better experience.

Fuse adopts the form of "fuse holder + fuse", which is easy to disassemble; the lateral design of the main control board seat perfectly matches the space characteristics of Voron V0 machine that needs to fix the mainboard vertically.

ID design is newly upgraded. It adopts the Raspberry Pi board frame, which is perfectly installed with Rasberry Pi to save internal space. The appearance and performance coexist. It is the coolest choice for Voron players.

B
Benjamin Chung
Good, with a few caveats.

The SKR pico is working nicely now in my Ender 3 with a new custom front enclosure. There's a few issues, however, that make me say that it isn't perfect:

* The single biggest problem I had is that the motor pinout in the schematic on Github is wrong. It's labelled 2B-1B-1A-2A but is actually 1A-1B-2A-2B. This matches Creality's (and most other vendor's) wiring, but as someone who carefully reads both the TMC datasheet and the schematic diagram, this really caught me up.
* The UART cable for the rpi is a bit short. Also, the photo shows it plugged in opposite the actual plug connectors (e.g. the JST is plugged into the Pi not the Pico for whatever reason).

Otherwise, my experience installing and putting the SKR Pico into service was excellent. Something I would generally suggest to other users is to flash Klipper using SWD from the Pi (requiring an additional three wires be connected) instead of by the bootloader, which once installed is faster, easier, and more reliable.

A
Alexandra Stanovska
Haven't received board yet

The package hasn't arrived yet.

Run for few days and back to leave this review. Everything is ok.

It's smaller than how I image before. excellent. 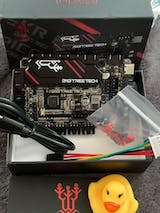 You may also need... Please SAVE to make app work